BATU PAHAT: A 43-year-old foreign man was arrested to help with investigations following the death of a man who was found lying on the road at Jalan Penjaja, here.

Batu Pahat OCPD Asst Comm Ismail Dollah said that police received the report on the incident at 8pm informing that a man in his 50s was seen unconscious on the road.

“A medical team that arrived on the scene then pronounced the man dead.

"Investigation in the surrounding area then discovered the suspect who was attempting to flee the scene," he said in a statement issued here on Wednesday (Jan 25).

The suspect was caught by the security officer at the nearby building and was handed over to the police, he said.

An investigation of the victim’s body found an injury on his head, and a check of the nearby CCTV and testimony from witnesses confirmed that there had been an altercation between the two before the victim was found dead.

“The body has been brought to the Sultanah Nora Hospital for a postmortem, while the suspect will be brought to court to get a remand,” he added.

The case is being investigated under Section 302 of the Penal Code for murder, which carries the death penalty upon conviction. 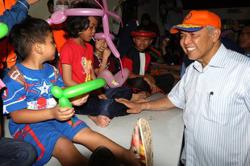