KOTA BARU: Parti Keadilan Rakyat (PKR) will implement a five-year plan from this year to 2028 to strengthen the party and its machinery in Kelantan and Terengganu, says Rafizi Ramli.

The PKR deputy president said the plan needs to be implemented well, with each division leader and member will have their respective responsibilities and roles to reach out to the local community.

"They (voters) need the confidence to be with PKR, which they will see through our presence, service quality and so on.

"Therefore, we have three weeks to scrutinise and discuss this with the party’s top leadership, and this five-year plan is expected to be launched at the end of February,” he told reporters after officiating at the Kelantan PKR Election Convention here Saturday (Jan 21).

Rafizi, who is also Economy Minister, hopes that all PKR members in both states will take the opportunity to work together to ensure that the party continues to be accepted by the community.

Meanwhile, he said the PKR cooperative is expected to be launched next month but is subject to approval from the Cooperative Commission. - Bernama 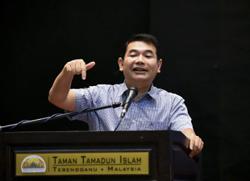