KUALA TERENGGANU: Heavy rain in Terengganu caused flooding in Kuala Terengganu that resulted in the evacuation of 50 residents from their homes.

The state disaster management committee secretariat said two relief centres were opened to accommodate the flood victims, who are from several locations in Chendering and Atas Tol.

The first centre was opened at 7.15am yesterday at SK Chendering to provide temporary shelter to 33 victims from nine families.

Another centre was activated in SK Atas Tol to house 17 victims from four families, Bernama reported the secretariat as saying in a statement.

It added that rainfall is still occurring in most districts and more people are expected to be evacuated.

Based on data shared by the Irrigation and Drainage Department on its website publicinfobanjir.water.gov.my, the water level in Sungai Nerus and Sungai Chalok in Setiu, as well as Sungai Tersat and Sungai Telemong in Hulu Terengganu, has exceeded the danger level.

Separately, the Meteorological Department (MetMalaysia) has issued a danger-level alert with continuous heavy rain for several districts in Kelantan and Terengganu. Raindrops keep falling on my head: A boy riding a bicycle through floodwaters while other residents look on as heavy rain continues to falls in Kampung Gong Pak Maseh, Kuala Terengganu. — Bernama 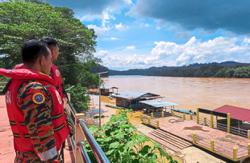 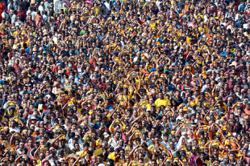