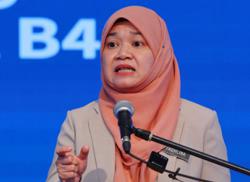 PETALING JAYA: They know what they don’t know – young voters themselves are asking for political education to be embedded in the education system to prepare them to make informed decisions for the country’s future.

As it stands, some of them had to resort to educating themselves.

One such young person was Siti Nor Hidayah Sahrunizam. Her first experience of voting was in the 15th General Election last month, and she had armed herself with the necessary research prior to polling day.

The 22-year-old did online research on each candidate in her Tebrau constituency before making her decision.

“I think my decision was influenced by the things that I saw on social media, as I often scrolled through and read or listened to campaigns online – I was not at all influenced by my family as we have different views,” she said.

A 21-year-old student who wanted to be known only as Syed admitted to not having any comprehensive knowledge about politics, adding that his voting was influenced by family members and social media.

“I made my decision on who to vote for by watching videos from TikTok, Facebook, and others,” he said, adding that he would support the idea of introducing political education in schools.

“I was influenced by social media, but I also equipped myself with general knowledge.

“Before I made my decision, I vetted the candidates’ past performance to see if they had good leadership skills and the credibility to lead a country,” said the student from Pasir Gudang, Johor.

She, however, believes that political education should not be forced on students as it would deter them from actually learning the subject.

“I think that’s one way to introduce politics at a young age (through the syllabus). However, it shouldn’t be something too forceful that it would have the opposite effect on students.

“I would introduce it as a club for students to try and experience politics hands-on,” she added.