Double the merriment: Shoppers enjoying the convenience of bargain hunting as Christmas and CNY decorations are sold together. — KAMARUL ARIFFIN/The Star

KUALA LUMPUR: Walking down Petaling Street, it’s hard to tell what festive season it is.

Despite Christmas being just around the corner, shops around here have already begun selling Chinese New Year (CNY) products, with some placing these items next to their Christmas decorations.

Speakers are blaring out tunes normally associated with CNY, interspersed with Christmas melodies.

“We predict our CNY decorations will sell well too,” he said, adding that he expects Christmas decorations to be sold out within the next two weeks.

Kong also said that they decided to sell early to ensure their customers would be able to receive and set up their decorations before CNY.

“We want to ensure that we have enough time to package and send out big bulk orders, especially to those who have ordered from other states, as it can take up to a week for delivery,” he said when interviewed at Nu Lycie’s store near Petaling Street here yesterday.

“We get plenty of returning customers who buy both CNY and Christmas decorations every year.

“So, this year, we decided that we might as well sell both at the same time, especially with CNY and Christmas less than a month apart.

“This way, customers wouldn’t have to visit multiple stores to buy these decorations separately as they can just buy both directly from us,” he said when interviewed at Hello World’s store near Petaling Street.

Chinese supermarkets near Petaling Street were also seen selling traditional CNY food that would otherwise not be available at any other time of the year.

Among the foodstuffs are traditional Chinese cured meats such as pork belly, sausages, and duck legs.Annie Lim, a sales assistant at a Chinese supermarket near Petaling Street, said they had always received CNY cured meat shipments a month before the annual festive holiday over the past 15 years.

“The cured meats, in particular, take a long time to make, so we usually request early shipments of the meat from our suppliers in Hong Kong to ensure we have ready stock for early-bird customers.

“It just so happens that next year’s CNY happens less than a month after this year’s Christmas, so customers will be able to enjoy CNY cured meats for their Christmas dinner this year,” she said. 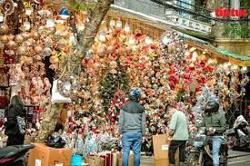 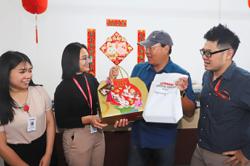