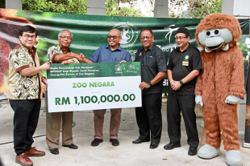 KOTA KINABALU: The Orangutan Action Plan 2020-2029 is vital towards the survival of the primate’s population in the state, says Datuk Jafry Arifin.

The Sabah Tourism, Culture and Environment Minister said the orangutan would be under threat if the plan was not implemented, adding there were only some 11,000 orangutans in the state presently.

The orangutan was also listed as critically endangered in the International Union for Conservation of Nature (IUCN) Red List of Threatened Species.

Jafry said one of the items in the action plan was to hold conservation and public awareness programmes for all stakeholders in Sabah.

“Among the measures outlined in the action plan that must be implemented in elevating awareness levels was, firstly, to ensure owners, managers and workers of plantations as well as developers to be abreast with the current legislation and protection of the orangutan.

“Secondly, there must be a guideline for sustainable orangutan tourism.

“Thirdly, there must be awareness campaigns on the primate and its habitat statewide such as turun padang (go down to the ground) programmes at plantations, villages, schools besides celebrating the World Orangutan Day or Orangutan Caring Week as a state-level celebration,” he added.

Jafry said efforts must also be made to develop an information centre for orangutans as well as dissemination of information through social media.

“And finally, to create a permanent syllabus on teaching conservation, including for the orangutan, in the national education curriculum for schools nationwide,” he said.

Jafry said this in his speech that was delivered by Sabah Wildlife Department director Augustine Tuuga in conjunction with the Orangutan Caring Week 2022 programme at the Sepilok Orangutan Rehabilitation Centre in Sandakan on Thursday (Dec 8).

The initiative was aimed at supporting orangutan conservation and to educate Sabahans on the importance of protecting the species.

The programme had kicked off earlier in October this year among school teachers and plantation workers through the Environmental Education Race initiative by the Sabah Forestry Department.

It was then held in five schools in Sandakan as part of the programme’s tour before it was extended to tourists, tourist guides as well as tourism operators, oil palm plantation operators and students at the Sepilok Orangutan Rehabilitation Centre.

The programme, funded by the Sabah Science, Technology and Innovation Ministry, was targeted to showcase the application of STEM in research and management of wildlife.