PETALING JAYA: The big victory achieved by Perikatan Nasional (PN) in Padang Serai and its narrow defeat in the Tioman state seat in the 15th General Election (GE15) prove that the people are not excited about the Pakatan Harapan-Barisan Nasional coalition, says Tan Sri Muhyiddin Yassin.

The Perikatan chairman said people were not confident in the ability of the coalition government, led by Pakatan, to govern the country.

“BN's majority declined by almost half in Tioman and PN's majority in Padang Serai was double the majority won by Pakatan in GE14.

“This is proof that the people do not trust the combination of PH and BN.

“They are not confident in the ability of this coalition government to govern the country. Many supporters of these two parties have switched to supporting Perikatan," he wrote in a post on his Facebook page on Thursday (Dec 8).

The former prime minister said the results of voters in Padang Serai and Tioman clearly showed that the people do not approve of Pakatan and Barisan.

"For me, Pakatan and BN's lies in GE15 was 'the biggest electoral fraud ever'.

“Today, the voters in Padang Serai and Tioman have given a clear signal that they do not approve of the actions of these two parties,” he said.

Azman, who is also Lunas assemblyman, obtained 51,637 votes, beating five other candidates with a majority of 16,260.

Meanwhile, Muhyiddin said Perikatan was now on the right track.

“I would like to congratulate Cikgu Azman Nasrudin on his excellent victory at Padang Serai.

“To the PN candidate in Tioman, Nuridayu Hashim, continue your struggle.

“We are on the right track.

“I would also like to express my deepest appreciation and thanks to the entire PN election machinery in Padang Serai and Tioman for their commitment and hard work throughout the campaign period,” he said. 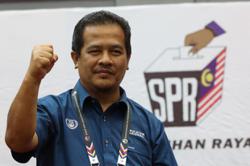