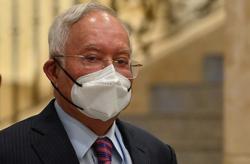 A three-judge panel, chaired by Justice Kamaluddin Md. Said, unanimously dismissed Najib's appeal on grounds that there was no appealable error by the High Court that could warrant appellate intervention.

Other judges on the panel were Justices Ahmad Nafsy Yasin and Nordin Hassan.

Najib is appealing against the decision by High Court judge Justice Collin Lawrence Sequerah on July 12, 2021, in his application for the documents.

He had filed his discovery application on March 24, 2021, as he wanted to compel the prosecution in the trial to disclose banking documents linked to Zeti’s family on claims that her family allegedly received monies from fugitive financier Low Taek Jho, also known as Jho Low.

In the decision, read by Justice Nordin Hassan, the panel said the documents sought by Najib were not relevant to his defence in the trial at the High Court.

"The appellant's defence, as put to the prosecution witnesses, was that the appellant was duped by one Jho Low.

"We are of the view that the documents sought by the appellant would not assist the appellant's defence," Justice Nordin said here on Thursday (Dec 8).

Najib also filed a second discovery application on April 7, 2021, to obtain a confidential settlement agreement between Malaysia and US-based Goldman Sachs Group in 2020, which included the transcripts or forensics report from the phones of Tim Leissner, a former Goldman Sachs partner in Asia, as well as data on Goldman Sachs’ server involving Leissner’s communications.

Najib's defence argued that the contents in Leissner’s mobile phone could show communication between Leissner and 1MDB officials and it would show that Najib did not have knowledge about the criminal schemes and it could also reveal to whom Leissner had paid bribes and kickbacks in 1MDB.

On this matter, the Court of Appeal said that the items sought in the second application were not in the respondent's (prosecution) possession and thus, the court would not issue an order in which the respondent could not comply with.

The panel noted that the appellant's counsel himself had indicated that the defence was no longer pursuing the application for these items to be produced.

Speaking to reporters outside the court, lead prosecutor Datuk Seri Gopal Sri Ram said the prosecution intended to call another seven witnesses, including Zeti, to testify in the 1MDB trial before closing its case.

Najib, 69, is on trial for 25 charges in total - four for abuse of power that allegedly brought him the financial benefit to the tune of RM2.28bil; and 21 for money laundering involving the same amount of money.

The main trial at the High Court continues before Justice Sequerah today.