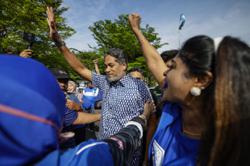 PETALING JAYA: The selection of deputy ministers has already begun, but it may take a week or two to be finalised, says Rafizi Ramli.

The Economy Minister said the matter was raised in the Cabinet on Monday.

“The process will be the same as the one used to form the Cabinet; there are certain rules in terms of the number of deputy ministers from certain coalitions. It will also depend on the number of parliamentarians from respective parties,” he said.

Rafizi was speaking to reporters after the 12th Malaysia Plan Half-Term Review “Kick-Off” Conference organised by the Economic Planning Unit in Putrajaya yesterday.

He added that the Prime Minister would determine the portfolios, and it was up to the coalition to nominate the names.

He also said that based on the names submitted, the Prime Minister will look at the suitability, expertise and experience of each ministry before bringing it for the approval of the Yang di-Pertuan Agong.

“So the process is this week; most probably it will take one to two weeks... I can’t really answer except that it’s started,” he said.