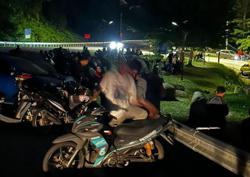 AMPANG: A man who is believed to have robbed eight convenience stores has been nabbed by police.

Ampang Jaya OCPD Asst Comm Mohamad Farouk Eshak said the 26-year-old was believed to be responsible for five cases in Ampang Jaya and three in Cheras.

"He was detained on Dec 1 in Pandan Jaya," he told a press conference at the Ampang Jaya district police headquarters on Wednesday (Dec 7).

ACP Mohamad Farouk said they received a police report from a convenience store cashier who was robbed at about 9am on Dec 1.

"The suspect pretended to buy cigarettes but when it came the time to pay, he held the cashier at knifepoint.

"He escaped with RM150 cash and a few boxes of cigarettes," he said.

A team of police officers and personnel raided a house in Pandan Jaya at about 8.30pm on Dec 1, he said.

"We also seized the suspect's clothing, cigarettes, cash, helmet as well as a motorcycle," he said.

ACP Mohamad Farouk said the suspect, who was previously a robbery victim, resorted to a similar crime after he was left jobless and faced hardship early last month.

"He also tested positive for methamphetamine and amphetamine," he added.

The case was classed under Section 392/397 of the Penal Code and the suspect had been remanded, he said.