Rafizi: Appointment of deputy ministers in a week or two 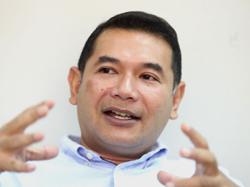 PETALING JAYA: It may take one to two weeks for the process of appointing deputy ministers to be completed, says Economy Minister Rafizi Ramli.

However, negotiations have already begun with the political parties having been asked to submit the names of suitable candidates.

He also confirmed that the matter was discussed briefly during the first Cabinet meeting yesterday (Dec 5).

"The process will be similar to the formation of the Cabinet; there are certain rules, in terms of the number of deputy ministers from a certain party depending on the number of Members of Parliament.

"The Prime Minister will determine the appropriate portfolio and it is up to the coalition to nominate names.

"After looking at the names, the Prime Minister will look at suitability, expertise and experience before bringing it for the approval of the Yang di-Pertuan Agong... it may take one, two weeks... but the process has already started," he said at a press conference after inaugurating the Half-Term Review Conference of the 12th Malaysia Plan on Tuesday (Dec 6).