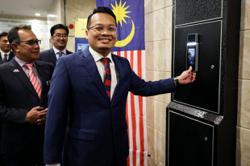 He said his ministry now needs to look into issues that were previously under the jurisdiction of the Energy and Natural Resources Ministry, as well as the Environment and Water Ministry.

“This portfolio requires me to focus on climate change, the environment, energy and so on. People are really concerned about these matters,” said Nik Nazmi who began his official duties at his office at Wisma Sumber Asli here yesterday. Nik Nazmi said his focus now is to ensure that the ministry will continue to move forward and make the green and renewable energy sector a success.

“Our focus is to move forward, but we have to make it equitable and inclusive. This means that when we make the transition, we can’t leave the people behind and as such the well-being of the B40s will be our focus as well,” he said.

“I have a lot to learn about this ministry,” he told Bernama after clocking in at 8.32am.

Chang was greeted on arrival at the ministerial building by the ministry’s chief secretary Datuk Dr Aminuddin Hassim.

Also reporting for her first day was Education Minister Fadhlina Sidek. Clad in a blue baju kurung, Fadhlina, who clocked in at 8.52am, was welcomed by Education Ministry secretary-general Datuk Yusran Shah Mohd Yusof and Education director-general Datuk Pkharuddin Ghazali when she arrived at the ministry’s lobby.