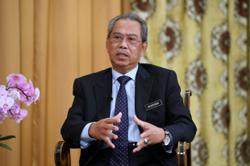 No sen-se: Not a single sen of this money went into my personal account, said Muhyiddin. — Bernama

PETALING JAYA: Perikatan Nasional chairman Tan Sri Muhyiddin Yassin has hit out at his critics who have accused the former prime minister of allegedly swindling RM600bil in government funds that was spent during his tenure.

He added that such a large sum of funds would definitely not have gone unnoticed by the National Audit Department (JAN), which audits government spending annually and whose report is then presented by the Public Accounts Committee (PAC) in Parliament.

“Not a single sen of this money went into my personal account. It doesn’t make sense that the money meant for public aid, which is directly deposited into people’s accounts, could be diverted into mine.

“It’s very unlikely that both JAN and PAC would have somehow overlooked such a large amount,” he said in a Facebook post yesterday.

Muhyiddin said that he had never embezzled or misused funds meant to help the people, and that even if he had, investigations would have been started a long time ago.

“Bank Negara would also definitely have been alerted if my bank account were to suddenly receive such a large sum of money as most have claimed,” he added.

He said that he only knew of the eight economic stimulus packages worth RM530bil that were implemented during the height of the Covid-19 pandemic, which mostly consisted of non-fiscal initiatives that did not involve government expenditure.

“This included initiatives like the i-Lestari, i-Sinar and i-Citra EPF withdrawal schemes worth RM145bil, the EPF payment reduction worth RM10bil, a moratorium on bank loan payments for both individuals and companies worth RM180bil, and government guarantees for company loans worth RM80bil, among many others.

“Only around RM83bil was actually spent by the government, which included expenses like vaccine purchases worth RM5bil and various forms of direct cash assistance for the people, such as wage subsidies worth RM20.92bil, along with many other welfare programmes, according to the Finance Minister’s statement on June 29, 2021,” Muhyiddin said.

He claimed these allegations only came to light recently as a way to silence opposition against the new unity government.

“Don’t keep on pointing fingers at others with nonsense accusations just to cover up the weakness of the current government.

Calls for an official investigation into the stimulus spending first arose after claims emerged of the alleged well-funded campaign Perikatan ran during the 15th General Election.

Umno information chief Isham Jalil, Amanah mobilisation director Mohd Sany Hamzan, and Youth vice-chief Ammar Atan, as well as the Muslim Consumers Association of Malaysia (PPIM), have all called for a Royal Commission of Inquiry (RCI) into the government’s spending during the Covid-19 pandemic.