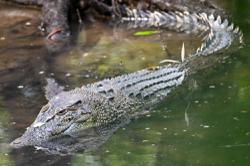 KOTA KINABALU: Wildlife rangers are trying their best to hunt for a killer crocodile that devoured a toddler in Lahad Datu recently.

“It is quite hard to capture a crocodile at sea. On Dec 3, our men shot one dead but later discovered it was not the one that attacked a child recently,” he said.

He said they had ways to determine whether the crocodile they caught or killed was the one they were looking for.

He advised coastal villagers and anyone going to the sea or rivers to be aware of their surroundings.

On Dec 1, a man and his one-year-old son were on a wooden boat near the Lahad Datu Marine base when the reptile struck.

The reptile snatched the little boy from the boat, and his father quickly jumped into the sea.

The father was attacked and sustained injuries but failed to retrieve his son from the crocodile’s jaw.

He was later given treatment and stitches for his wounds.