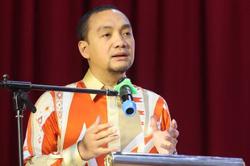 ISKANDAR PUTERI: Pakatan Harapan will not be requesting changes to the Johor state assembly composition despite the unity government formed at the Federal level, says Liew Chin Tong.

The Johor Opposition chief and Perling assemblyman said this was because Pakatan accepted the results of the state election held in March, which gave Barisan Nasional a two-thirds majority after it captured 40 out of the state’s 56 seats.

“However, taking into account of the15th General Election results which led to a Federal unity government, we humbly ask the Johor Mentri Besar (Datuk Onn Hafiz Ghazi) and the state government to forge a stronger bi-partisan relationship for the good of the people.

“When Benut assemblyman Datuk Seri Hasni Mohammad was mentri besar in 2020, he likened the Opposition to a ‘strategic partner’ to the state government.

“I agree with him and hope his idea can be accepted by the present state government as well,” he said during the debate session of the state assembly sitting at Kota Iskandar here on Sunday (Dec 4).

“This caucus, assisted by the state government, can channel information from the state level to the Federal level.

“This mechanism will allow the national unity government to better focus on Johor’s developments and address the needs of the people in the state,” he added.