The Pahang Barisan chairman said securing victory was also needed to balance the number of seats in the Pahang Legislative Assembly.

During GE15 on Nov 19, Barisan won 16 state seats in Pahang, one fewer than Perikatan Nasional with 17, while Pakatan has eight.

"We have no choice. As of today, the situation (voter sentiment) is still 50-50, but I was informed that the graph (support for Barisan) is going up.

"We and Pakatan are sincere in establishing a government for the stability of the state," he said when speaking at the "Santai Anak Muda" programme here on Thursday (Dec 1).

Wan Rosdy, who is Pahang Mentri Besar, urged the party machinery to be more aggressive and meet as many voters as possible, especially the young voters, to ensure victory for Barisan in Tioman.

Polling for the Tioman state seat is on Dec 7 after it was postponed due to the death of Perikatan candidate Md Yunus Ramli, 61, on polling day.

However, Amanah decided that its candidate Mohd Fadzli would give way to the Barisan candidate to increase his chance of winning but his name remains on the ballot paper. – Bernama 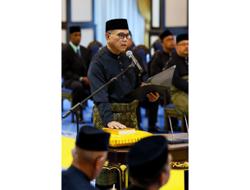