The MCA president described Abdul Hamid's passing as a big loss to the country and the community.

"His contributions will be remembered eternally," said Dr Wee, who is also Ayer Hitam MP, in a Facebook post.

His remains will be laid to rest on Dec 2 after Friday prayers at the state mosque in Arau.

Abdul Hamid, a medical doctor by profession, served as the sixth mentri besar for the northern state from 1986 to 1995.

He leaves behind his wife, five children and several grandchildren. 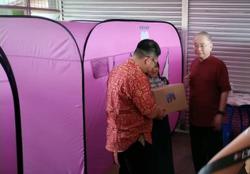