Thumbs up: Dr Wee receiving the RM318,800 raised by the Petaling Jaya Cafe and Catering Traders Association at his office in Kuala Lumpur. — Photo taken from Dr Wee’s Facebook page

PETALING JAYA: A total of RM318,800 has been raised by the Petaling Jaya Cafe and Catering Traders Association for the construction of the Tunku Abdul Rahman University (UTAR) Hospital, according to Datuk Seri Dr Wee Ka Siong.

In thanking the association, the MCA president said the contribution was raised through charity sales and meals.

The money was handed over to Dr Wee at his party office in Kuala Lumpur yesterday.

“Thanks to association president Keu Kok Meng and all of its members who continued supporting MCA’s efforts, specifically for the construction of the UTAR Hospital that will benefit the community, regardless of race and religion, when it is completed soon,” said Dr Wee.

Construction of the hospital began in 2018 on a 6.07ha plot of land in Kampar, Perak.

The project is estimated to cost RM330mil, with RM260mil having been raised as of October. 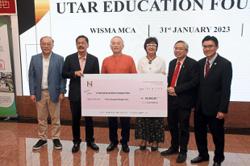