GEORGE TOWN: Holidays, ironically, can become a headache as well.

Federation of Malaysian Manufacturers (FMM) Penang chairman Datuk Lee Teong Li explained that the last quarter of the year was usually a crucial time for companies as they would rush to complete their production and shipment before the festive period starts.

“Thus, unplanned off days are a bane and the government should take into account these issues when declaring a holiday,” he said.

He said that overtime payments for workers could run into hundreds of millions of ringgit throughout this period.

“These expenses are not budgeted, which creates difficulties in production and financial planning.”

Public holidays were declared for Nov 18 and 19 to allow voters to get home for polling.

And tomorrow is also a public holiday, following the appointment of Malaysia’s 10th Prime Minister.

“This is taxing for companies,” said Lee, noting that Christmas and New Year holidays were approaching as well.

And despite the three-day weekend, the Malaysian Association of Hotels (MAH) did not see a surge in bookings.

That’s because the public announcement holiday for tomorrow came too suddenly, which meant that holiday-makers could not make arrangements for hotels and flight tickets, said MAH Kedah/Perlis chairman Eugene Dass.

“The occupancy rate is still hovering around 50% to 55%, including in Langkawi,” he said.

Many people, he added, had not expected an off day tomorrow, so they decided to stay put and take a longer break during the school holidays, which is only about 10 days away.

The situation is similar in Penang, too.

MAH Penang chairman Tony Goh said the occupancy rate was at 55% to 60% currently in Penang, as people were waiting for the December holidays.

“Despite the extra off day, many just can’t pack up and go as they have to plan out their holidays.

“And it’s too close to the school break next month. They will rather wait,” he said.

“Moreover, many of them had gone home for the polls, so travelling again is definitely out of the question due to the cost factor,” he said.

Bookings for flight tickets would be exorbitant during weekends and on a short notice, he said.

“So, people are not willing to spend that kind of money and would rather put off the holidays for now,” he added.

Hameediyah Restaurant director Muhammad Riyaaz Syed Ibrahim believes that there are more patrons due to the extended weekend, allowing out-of-towners to plan for a drive to Penang.

“Another reason is probably because one popular nasi kandar restaurant here has been closed for some time. So, people will go elsewhere to savour their favourite dishes,” he said. 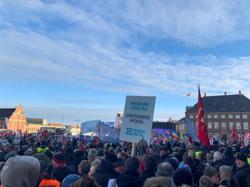