The SAPP president said the party's supreme council endorsed the decision to remain a member of the Perikatan coalition.

"The supreme council has reaffirmed its membership in Perikatan, which has pledged to play the role of check and balance at the federal level," he said in a statement Saturday (Nov 26).

SAPP, however, also supported the decision of GRS to support the federal unity government.

PBS is not a member of Perikatan while Sabah Bersatu comes under its national party led by Tan Sri Muhyiddin Yassin.

Yong, who is a nominated assemblyman, is part of the GRS-Barisan Nasional state government. SAPP unsuccessfully contested the Sandakan parliament seat on a GRS ticket.

Yong said that SAPP was confident that the new federal government leadership will work with the state government of the day in the spirit of the Constitution for the common good of the people irrespective of political alignment.

The current political scenario in which GRS-Barisan leads the Sabah government while Pakatan leads the federal unity government calls for mutual respect and support and is in accordance with Constitutional arrangements in a federal system.

"Such constitutional arrangements are paramount in building a strong federation. It is also wise for the governments of the day, at both the federal and state levels, to have a healthy relationship in order for both levels of government to be more effective and efficient in governing the country," Yong added. 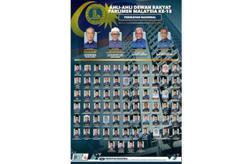