SHAH ALAM: A group of state civil servants listening to the live-stream of Selangor’s 2023 budget could not contain their joy when the windfall awaiting them was announced by Mentri Besar Amirudin Shari.

Amirudin said the state’s civil servants would be receiving special financial aid payouts as appreciation for their excellent service and commitment.

Those working in the state under the Federal Government’s payroll would also receive monetary aid, he said..

Known as Bantuan Khas Kewangan 2022, Selangor’s civil servants had earlier received one month’s salary or a minimum payment of RM1,000 in conjunction with this year’s Hari Raya Aidilfitri celebrations.

As soon as Amirudin announced this, a group of civil servants seated in the state assembly dining room started clapping and cheering loudly.

Out of the RM2.45bil budget, RM1.25bil, or 51%, will go towards administrative expenses and the rest for development.

“The deficit is higher than last year’s because of the need to prepare for disasters due to climate change and initiate substantive development to meet the state’s sustainable development needs,” said Amirudin.

He added that although the state’s past five budgets had been deficit budgets, the state government had always succeeded in reducing the deficit to a reasonable amount through expense control instruments and sound financial management principles.

According to the mentri besar, the state government has planned to collect more than RM2bil in revenue in 2023.

“Among the main contributors to the state’s revenue are land premiums, which amount to RM753.72mil, which is 38% of the overall deficit estimation,” said Amirudin.

Unlike previous years, where the development budget focused on infrastructure, he said the 2023 budget’s development allocation would focus on the social sector.

“The increase in allocation for the social sector, which covers 30% of the total development allocation, is aimed at strengthening social protection, encompassing welfare and education, and strengthening the economic status of target groups.

“A total of RM287mil, or 24%, has been allocated towards economic development, and 17% (RM198mil) has been planned for the health, education and rural development sectors,” he said.

Later, at a press conference, Amirudin said the budget was formulated after taking into consideration the global economic situation as well as Malaysia’s and Selangor’s economic challenges in 2023.

“Our focus will be placed in several areas, such as job opportunities, housing, environment, women, youth and education,’’ he said. 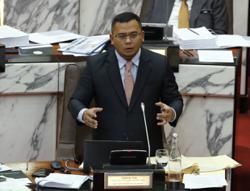