Mohd Johari knows he must deliver Tioman for BN ROMPIN: Tioman incumbent assemblyman Datuk Seri Mohd Johari Hussain is very much aware of the heavy burden he is shouldering to deliver the state seat for Barisan Nasional.

Barisan is currently one seat behind Perikatan Nasional, which now holds 17 seats in the Pahang state assembly.

If Johari could defend Tioman, it would put Barisan on an equal footing with Perikatan in the state assembly.

“This is a really heavy burden I am bearing.

This does not only involve my constituency but the whole state.

Even the nation is watching,” he said after the nomination process held at the Dewan Jubli Perak Sultan Haji Ahmad Shah here yesterday.

“If Barisan wins, there will be an equal number of seats with Perikatan.

However it goes, when it comes to forming the state government, I leave it to the leadership to determine the best direction for the interests of the people of Pahang. “Balancing the number of seats is one thing, but an important matter here is ensuring stability and the prosperity of the economy, politics, religion and race in Pahang,” he said.

Johari also hoped he could count on the support of state and national-level Barisan leaders in his campaign.

The Tioman election had been reset with five candidates vying for the state seat.

At the end of nomination, returning officer Datuk Ahmad Nasim Mohd Sidek announced that a new candidate from Perikatan, Nor Idayu Hashim, had been nominated.

Nor Idayu was the only one who filed her nomination papers, while three of the other candidates were present to draw lots to determine their positions on the ballot paper.

It was learnt that Mohd Fadzli sent a representative to draw his lot.

The election for Tioman was suspended on Nov 19 following the death of Perikatan candidate Md Yunus Ramli.

Early voting had been set for Dec 3, while election day would be held on Dec 7. 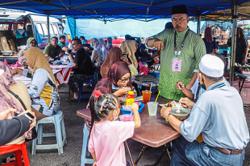 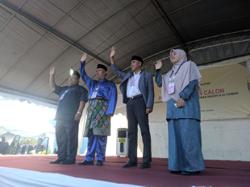