Ceasar Mandela Malakun, who is also GRS Penampang Youth chief, said this will also stir investor confidence, adding it was the right move in view of the looming threat of global recession next year which would affect the country.

"We welcome the newly minted Prime Minister Datuk Seri Anwar Ibrahim’s statement this morning, confirming that the GRS-led state government will be part of the unity government," he said in a statement on Friday (Nov 25).

"Our economy will inevitably face some difficulties with the looming threat of global recession next year," he added.

Sabah and Sarawak, he stressed, will be affected as both were two of the biggest oil and gas as well as palm oil producing states in Malaysia.

"And lowering export demands due to slower growth may in turn impact state revenue.

"With this risk of a slower global economic growth as a result of the Ukraine-Russia conflict, geopolitical uncertainty and global inflation pressure in 2023, it is important that we have a strong and stable unity government in Malaysia," Mandela said.

Anwar had earlier on Friday said that the unity administration under his leadership has achieved two-thirds majority in Parliament with GRS' participation.

"This will further enhance the country’s political stability and enable focus on works to raise the dignity of the country, boosting the economy to defend the people’s interest," he said, in a press conference at Perdana Putra. 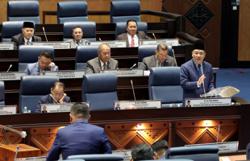