All parties staying mum on status of Pahang govt

As of Friday (Nov 25) afternoon, no coalition has officially entered a pact to form a unity government in Pahang.

However, other than Amirudin's revelation that Pakatan's eight Pahang assemblymen had signed statutory declarations (SDs) pledging support for Wan Rosdy as mentri besar, all the groups had kept mum over what transpired in their negotiations.

A source in Pahang Pakatan said the SDs were handed in on Thursday (Nov 24) and were addressed to the Sultan of Pahang as well as the Regent of Pahang.

The source said this was en bloc support for Wan Rosdy, similar in form to Barisan's support for the unity government led by Pakatan at national level.

Should Pahang Barisan choose to join forces with Pakatan, this would put their total number of seats at 24, giving them a simple majority to form the state government.

Perikatan secured 17 seats in the 15th General Election, making the coalition the largest bloc in the Pahang state assembly currently.

The state seat of Tioman had yet to be decided as the election would only take place on Dec 7.

Pahang MIC chairman V. Arumugam said Wan Rosdy had consulted with all Barisan assemblymen on Wednesday (Nov 23) to get their feedback.

"But that was before Anwar was appointed Prime Minister. I do not know what's the direction now," he said when asked about which side Barisan was more inclined towards.

Arumugam, who was the newly-elected Sabai assemblyman, said he would leave it to Wan Rosdy to decide.

Wan Rosdy, when met at the nomination for the Tioman election on Thursday, merely said that the formation of the state government was "in process".

In a short statement on Friday, he congratulated Anwar on his appointment as Prime Minister and also commended the Yang di-Pertuan Agong for his wisdom in solving the political impasse.

Let’s move on for the rakyat’s sake, says Perak MB 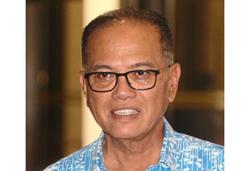