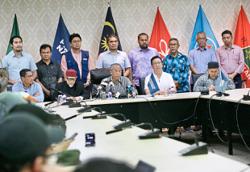 The Perikatan Nasional chairman added that Anwar can show that he has enough support through statutory declarations (SDs).

Muhyiddin added that he has the support of 115 MPs, including 10 Barisan Nasional MPs.

"For the sake of the confidence of the rakyat, Anwar should prove that he has the support of the majority of members of the Dewan Rakyat," he said at a press conference on Thursday (Nov 24).

The Pakatan Harapan chairman took his oath of office before the King at 5pm in Istana Negara.

Muhyiddin said that on Nov 20 - a day after the conclusion of the 15th General Election - the Dewan Rakyat Speaker had written a letter to all party presidents to name their candidate for the Prime Minister's post.

He added that the candidate to be named was the person that the party presidents feel enjoys the majority support of the Dewan Rakyat.

Muhyiddin added that on the same day, the Speaker also sent a letter to party presidents asking for the name to be submitted along with statutory declarations for the MP they preferred to be the 10th Prime Minister.

He said that Perikatan then sent a letter through the PAS secretary-general, Gabungan Parti Sarawak (GPS) chairman and Gabungan Rakyat Sabah (GRS) chairman and Parti Kesejahteraan Demokratik Malaysia (KDM) president to express their intention to form a government together under Perikatan.

Muhyiddin then said that a total of 115 SDs were submitted by Perikatan at 1.28pm on Monday (Nov 21), ahead of the deadline given by Istana Negara.

He added that this includes SDs from 10 Barisan MPs.

This is despite reports that the 10 Barisan MPs had later withdrawn their SDs supporting Muhyiddin as the prime minister.

"I believe at that point, I enjoy the majority of confidence from the members of the Dewan Rakyat," said Muhyiddin.

Asked if he would table a motion of no confidence against Anwar when Parliament convenes, Muhyiddin said that he would allow Anwar to show the necessary evidence first.

"We shall wait and see," said Muhyiddin. 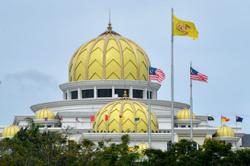