“That is just propaganda. What does BN have to do with PN? Where BN is contesting, PN will be there against us as well. On the claims that both parties will merge (after the election), that is just ‘psy war’ (psychological war) by people who are going to lose,” he said during an event on Thursday (Nov 17).

Saarani was responding to claims made by Perak DAP chairman Nga Kor Ming who said that Barisan and Perikatan have made plans to merge after the election.

Nga attributed his claims to a Nov 15 statement made by PAS secretary-general Datuk Seri Takiyuddin Hassan who said Perikatan is willing to work with any parties including Barisan to form a government after GE15.

However, Takiyuddin later claimed that his comments were taken out of context and reiterated that Perikatan would be able to form the government on its own.

“Nga Kor Ming knows he is going to lose so what else can he say? He has to deceive the rakyat once again with this ‘one vote for PN is one vote for BN’ claim. It’s all ‘psy war’,” he said.

Earlier, Perikatan launched its manifesto for Perak today, which include offerings such as financial aid for newlyweds, an esports stadium and housing for 50,000 families.

“They only decided to release their manifesto today after I kept on challenging them. But what is different about their manifesto from ours? BN has also pledged to provide 50,000 affordable homes. They just copied what we have announced (on Nov 8). I’m confident people won’t fall for their manifesto,” said Saarani. 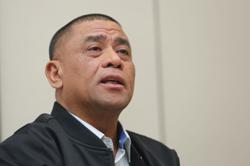