‘Bring my grandson home for CNY’ Urgent plea: Chong (centre) with Low (left) addressing the media on the plight of her grandson in Myanmar.

IPOH: A 61-year-old waitress is hoping to be reunited with her grandson, who was tricked into working as a scammer in a foreign country, before Chinese New Year.

Only wanting to be known as Chong, she said her 19-year-old grandson Ah Yang had begged her to rescue him from a heavily-guarded compound in Myanmar and bring him home.

Chong said she got a call from her grandson on Nov 14 via Facebook Messenger, and he told her that he had been beaten and zapped with an electric rod.

“He was crying and wanted to be rescued and come home. He told me that he has injuries all over his body. I am really worried about how he is holding up there,” she told a press conference held by Ipoh Barat MCA coordinator Low Guo Nan here yesterday.

“I want him to come home soon and hopefully be reunited with us before Chinese New Year,” she said in between sobs.

Ah Yang, who last worked here as a kitchen assistant, had in May informed his grandmother that he had found work in Kuala Lumpur.

“He then told me he was flying to Thailand, having landed a high-paying job there.

“Since then, I had lost contact with him until I got the call a few days ago,” added Chong.

She also said that she had tried messaging him on WhatsApp earlier, only to find out that the messages were read but not replied.

Chong said Ah Yang had stayed with her since his parents divorced when he was only three years old.

“I saw his latest picture and he has lost so much weight.

“During the recent call, he told me that he had tried to escape but failed,” she added.

Chong said her grandson was being held in a compound known as “KK2” in Myanmar, with hundreds of other Malaysians working as scammers there.

Low said he had accompanied Chong to lodge a police report and had also written to the Interpol, Aseanapol and Malaysian Embassy in Myanmar about this matter.

“I told Chong not to pay the ransom to get her grandson back as there was no guarantee that he would be released,” he said, adding that he had gathered the necessary information and passed it to the relevant authorities.

“There are still a lot of Malaysians trapped abroad in similar situations while there were also those who had been rescued and returned home.

“I believe there are still a lot of job opportunities in Malaysia and I hope job seekers can just stay back instead of going abroad,” he said. 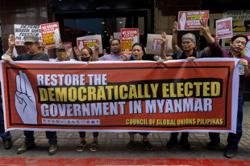