“He asked for the seat to be given to him, and that is why I endorsed him,” he added.

The Umno president was responding to questions from the media about the Health Minister’s candidacy in Selangor after he attended an event at the Barisan’s command centre in Titiwangsa, Kuala Lumpur, on Wednesday night.

When pressed further about the aspirations of Khairy, the incumbent MP in Rembau, Negri Sembilan, to become a future prime minister, Ahmad Zahid merely replied that this would depend on the next general election.

Khairy is being fielded for the first time in Sungai Buloh after his Rembau seat was given to Umno deputy president Datuk Seri Mohamad Hasan, who is making his parliamentary debut this GE15.

While campaigning in Sungai Buloh on Tuesday, Khairy said he was ready for the prime minister’s job but it was not time yet.

He acknowledged that for now, Datuk Seri Ismail Sabri Yaakob remained Barisan’s choice to be the PM.

Refuting allegations that he had asked for the Sungai Buloh seat to be given to him, Khairy said he “had to do something on his own” to find a constituency.

“In reality, I didn’t have any other choice because the party leadership didn’t give any indication to me as to where I should go (to contest in).

“I was left alone and knew I had to leave the Rembau seat. I took my own initiative to meet Selangor Umno chairman Tan Sri Noh Omar and MIC president Tan Sri SA Vigneswaran,” said Khairy when asked to respond to Ahmad Zahid’s claim that Khairy had personally asked for Sungai Buloh.

“There were no signals from the party leadership and I was not invited to any seat discussions. Nomination day was approaching, and I had to do something,” said Khairy, adding that he chose Sungai Buloh after being told there were only two or three parliamentary seats left at that point.

Met during a visit to SME Aerospace, a company that manufactures components for aircraft in Jalan Kuala Selangor yesterday, the three-term Rembau MP declined to comment further, saying he did not want to quarrel with Ahmad Zahid, and preferred to focus on winning Sungai Buloh for Barisan.

On Perikatan Nasional chairman Tan Sri Muhyiddin Yassin’s comments that Khairy was qualified to become prime minister, but was in the wrong party, Khairy laughed and thanked Muhyiddin for commenting on the quality of his work. 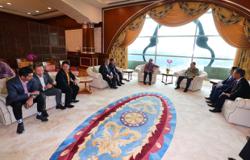