GE15: Long story behind my leaving PKR in 2020, but now not the right time, says Saifuddin Abdullah

KUANTAN: There is a long story behind my decision to leave PKR in the events that led to the collapse of the Pakatan Harapan government in 2020, says Datuk Seri Saifuddin Abdullah.

When asked why he made the decision, Saifuddin said he could answer but it was not the right day to do so.

"It is a long story. It started way before I joined PKR. The turbulence within PKR had then been happening for a long time.

"I joined in 2015 and there were several incidents, some of which the leaders may know more than I do.

"I am not too interested in answering the question other than saying that at that time, Tun Dr Mahathir Mohamad resigned as prime minister on Monday. As I recall, my comrades and I supported Dr Mahathir to become prime minister again.

"During the process leading to Tan Sri Muhyiddin Yassin being appointed as prime minister by the Yang di-Pertuan Agong, Datuk Seri Anwar Ibrahim was the one who came forward wanting to be prime minister," Saifuddin said on Thursday (Oct 27).

He added that Dr Mahathir then lost the numbers needed as Anwar had shown up to compete for the position.

"It was only on Friday that Muhyiddin's name came up because it was feared Dr Mahathir no longer had the support... which is why I said the story is long with twists and turns," he said.

The incumbent Indera Mahkota MP was asked about the rationale behind his move considering that PKR deputy president Rafizi Ramli had recently gone all in at attacking him for being a traitor.

Rafizi, when speaking at the Kuantan leg of the Ayuh Malaysia tour on Tuesday night (Oct 25), had claimed that he was the one who brought Saifuddin into PKR, admitting that he was naive for doing so.

Rafizi also described Saifuddin's character as always getting close to other people when it appeared they would be of benefit to him.

To these accusations, Saifuddin said he did not fall from grace in Umno as alleged by Rafizi.

"I left because I was dissatisfied with the way Umno, specifically its president Datuk Seri Najib Razak, handled the 1MDB issue when two leaders, Muhyiddin and Datuk Seri Mohd Shafie Apdal were sacked," he said.

Saifuddin denied it was Rafizi who brought him into PKR, saying that it was a certain professor who arranged his meeting with then party president Datuk Seri Dr Wan Azizah Wan Ismail and Nurul Izzah Anwar.

"This professor, whom I will not name, also arranged my meeting with then PKR deputy president Datuk Seri Azmin Ali.

"I do not deny discussing the matter with Rafizi but the real person who brought me in was that professor, whose name is known by Wan Azizah, Nurul Izzah, Azmin and, I believe, Rafizi as well.

"Anwar knows this professor too," he said.

Saifuddin also said it was not his style to condemn others and he had known Khairy before he contested Temerloh and was elected as an MP in 2008.

Saifuddin denied as well that it was Rafizi who helped set up his office in Bentong when he was initially slated to contest in the parliamentary constituency in GE14.

"As for how I ended up contesting in Indera Mahkota, it was the decision of Wan Azizah. We have to learn how to respect our party leaders. We must understand that these decisions can be complex but don't question Wan Azizah, who made the final decision," he said.

Saifuddin said he was quite upset that Rafizi had attacked him personally, seeing that both of them were old boys of Malay College Kuala Kangsar.

"He couldn't even say my father's name right. It's Abdullah and not Dollah. We have to exercise prudence when criticising someone. 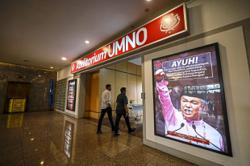