Transport Ministry, CAAM to speak with Chinese counterparts to increase flights between both countries 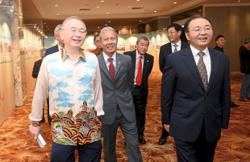 PETALING JAYA: Transport Minister Datuk Seri Dr Wee Ka Siong will work with their Chinese counterparts on the possibility of increasing flights between the two countries.

"We hope the frequency of flights will surpass that recorded during the pre-pandemic era and will therefore boost the economy of both nations – especially for business travel and tourism," he said at the reception of China's Future: Development and Opportunities at the Shangri-La Hotel in Kuala Lumpur on Wednesday (Oct 26).

He also noted that China has been Malaysia's largest trade partner since 2009.

"In the first eight months of 2022, Malaysia's trade has jumped 31.1% from year to year and our imports and exports have increased significantly in the past nine months of this year.

"I hope to see more improvements such as this in the near future," he said in his speech as a special guest.

On the East Coast Rail Line project, he said: "China's expertise is also involved as highlighted by Chinese Ambassador to Malaysia Ouyang Yujing in his speech earlier.

"The ECRL network will link the East Coast and Peninsular Malaysia, which will greatly shorten the travel time," he said, adding that by extension would involve the greater Klang Valley and the East Coast but also to Indo-China and eventually China.

He also spoke of MCA's active role in promoting friendly relations between Malaysia and China.

"MCA bridges China with the ruling party to integrate China's Belt and Road with our national development policies to reap the rewards of this initiative together with our Chinese counterpart.

"MCA will continue to play an active role and maintain close contact with the Chinese government to promote the friendly relations between the two countries while leveraging this bilateral link for greater successes in various sectors and fields," he said.

He said Malaysia would maintain an active role in maintaining close contact with the Chinese government to work together to produce more comprehensive programmes.

"Let us simultaneously promote the friendship between our countries while leveraging this bilateral relationship for greater successes in transport, logistics, manufacturing, research, education and much more," he said. 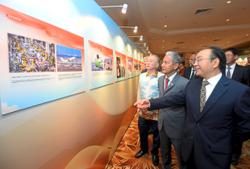