SHAH ALAM: The education syllabus currently practised in schools is not a "Radzi Jidin" syllabus, says the Education Minister.

Datuk Dr Radzi Jidin said some quarters are politicising the issue despite the education syllabus being introduced in 2017.

"This is not a Radzi Jidin syllabus. It takes time to develop an education syllabus and we take into consideration views from teachers and schools

"Education needs to be distanced from politics. But some politicians are taking advantage of the situation and politicising the issue of syllabus in schools," he told reporters after the launch of the Inisiatif Reading Progress Di Sekolah event here on Tuesday (Oct 18).

Radzi said that an education syllabus cannot be changed too often as it will be inconvenient to teachers and students.

"Our approach is to review the syllabus after its cycle has ended. This means that Year One students who started using this syllabus in 2017 will complete one cycle when they enter Year Six.

"Upon the completion of the cycle, the ministry will review the syllabus again. We will take into consideration the views of parents and teachers when we do this," he said.

The issue of education syllabus came into attention following a viral Facebook post by a teacher questioning issues affecting pupils.

Primary school teacher Mohd Fadli Mohamed Salleh had voiced his views on the learning syllabus that he considered was of too high a level and inappropriate for students.

The Education Ministry in a letter had said Mohd Fadhli may face action for not going through the proper channels in voicing his dissatisfaction.

On Sunday, Education director-general Datuk Pkharuddin Ghazali said the board would meet after receiving a letter of representation submitted by Mohd Fadli on Oct 14.

Pkharuddin said the show-cause letter to Mohd Fadli did not mean that punishment had been handed down by the board.

On a separate matter, Radzi said the Parliament dissolution has put several of the ministry's initiatives on hold.

"We have completed the Cabinet papers to improve Internet connectivity and speed in schools. But what to do, the Parliament has been dissolved.

"I'm disappointed as there were many initiatives that we wished to implement," he said.

Prime Minister Datuk Seri Ismail Sabri Yaakob said on Oct 10 that the King had given his formal consent to dissolve Parliament, paving the way for the 15th General Election (GE15) to be held within 60 days. 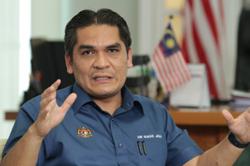