KUALA LUMPUR: The High Court here has allowed an application by Datin Seri Zizie Izette Abdul Samad, who is accused of abetting her husband Datuk Seri Bung Moktar Radin in a RM2.8mil corruption case, to have her review application transferred to a different High Court.

Justice Collin Lawrence Sequerah allowed Zizie Izette's application to transfer the review application against the Sessions Court decision that ordered her to enter her defence to Criminal High Court 7, where her husband's review application will be heard before Judicial Commissioner Azhar Abdul Hamid.

Earlier in the proceedings here on Friday (Oct 7), Justice Sequerah was informed by Zizie Izette's counsel M. Athimulan that the prosecution did not object to the transfer.

DPP Mohd Sophian Zakaria confirmed to the court that the prosecution had no objection to both cases being transferred to the same court.

Both the review applications are scheduled to be heard on their merits before JC Azhar on Oct 17.

Mohd Sophian later told the press that the prosecution would be making its arguments on Zizie Izette and Bung's stay application, their application to consolidate the cases, as well as the review application on the Oct 17 hearing.

On Sept 2, Sessions Court judge Rozina Ayob ordered the couple to enter their defence on corruption charges after finding that the prosecution had made a prima facie case against them.

Zizie Izette was accused of three charges of abetting him.

Justice Sequerah granted the couple a stay on the hearing of their defence trial pending the disposal of their applications to review the lower court order which ordered them to enter their defence on the charges.

Bung and Zizie to enter defence 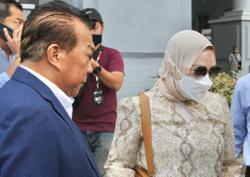