AMPANG: Perikatan Nasional Ministers had sent a letter to the King to state their disagreement for the general election to be held this year due to the forecast of a severe monsoon, admits PAS deputy president Datuk Seri Tuan Ibrahim Tuan Man.

Tuan Ibrahim, who is also the Environment and Water Minister (Kasa) said that the letter was sent on Wednesday (Oct 5) night after a meeting of all the party components of Perikatan.

"We have yet to receive a reply to that as of now," said Tuan Ibrahim.

He said this to the media after a briefing to the King on the northeast monsoon forecast and national preparedness for the possible ensuing floods at the National Flood and Forecasting Centre of the Department of the Irrigation and Drainage in Ampang.

At a Perikatan's event on Wednesday, it was revealed that the letter dated Oct 3 was signed by the 12 Cabinet Ministers of Bersatu and PAS to state that they disagree that the general election be held this year.

Perikatan leaders at the event stated that the Palace had received the letter on Oct 5.

ALSO READ: Why is the Opposition looking out for govt’s interests? Saravanan questions ‘angry rakyat’ logic

The letter stated that the Meteorological Department has forecasted a severe monsoon to come, and to allow the nation's economy to recover more fully as both will impact the Rakyat.

Talks of an imminent dissolution of Parliament has been on the cards, especially with the Prime Minister Datuk Seri Ismail Yaakob has sought an audience with the King at 4pm on Thursday (Oct 6).

Perikatan has time and again stated that they do not agree to holding the polls during the floods season.

PAS has even decided that all three state assemblies under its rule will not be dissolved until the monsoon is over in March next year.

Why is the Opposition looking out for govt’s interests? Saravanan questions ‘angry rakyat’ logic 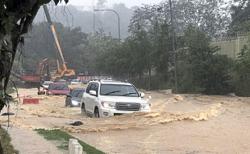