KOTA KINABALU: A man believed to be working for a drug syndicate was caught with more than 2kg of syabu after a brief high-speed chase involving the police in Sabah’s east coast Tawau district.

In the incident on Monday (Oct 3), the 30-year-old suspect had sped off in his car from a police roadblock mounted at Jalan Tiku at about 7.30pm.

“After a check, we found two plastic bags containing suspected syabu weighing 2,010g which were hidden under the driver’s seat,” he said in a press conference on Thursday (Oct 6).

“The drugs, believed to be worth some RM120,000, were seized and brought to the Tawau police headquarters together with the suspect for further probes,” he added.

ACP Jasmin said, based on their investigations, the drugs were meant to be sold in Tawau and its surrounding districts.

He said police were still trying to establish whether the suspect was the head of the syndicate or a mule hired to deliver the drugs.

“The suspect tested negative for drugs after a urine test. He also does not have a criminal record,” ACP Jasmin said.

He added the suspect has been remanded seven days for investigations under Section 39B of the Dangerous Drugs Act 1952. 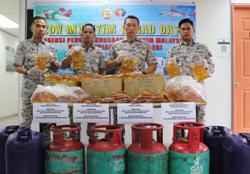