"Based on consensus achieved by MPs from the government and Opposition blocs in the Special Parliamentary Select Committee (SPSC), it is hoped that other MPs will give their support to the Bill when debates resume for a decision in the interest of public health and the nation," he said in a media statement Thursday (Oct 6).

He noted that the SPSC had recommended 23 changes to the Bill and submitted their report to the Dewan Rakyat on Wednesday (Oct 5).

Among the recommendations was the removal of the proposed clause to make it an offence for those born after Jan 1, 2007, to be in possession of cigarettes or related tobacco products.

It would still be an offence for youths born after the period if caught smoking or vaping.

However, offenders penalised under the proposed law would not have a criminal record.

The committee also recommended lowering the fine from RM5,000 to RM500 with the law to be enforced after three years of advocacy and awareness.

The bi-partisan SPSC was set up on Aug 2 to further scrutinise the proposed Tobacco and Smoking Control Bill (GEG) which was tabled by Khairy in Dewan Rakyat on July 27.

However, no vote was taken on the Bill during the second reading on Aug 2 with a motion passed instead to refer the matter to a bi-partisan SPSC.

This was done following resistance on certain aspects of the proposed law from several quarters including MPs from both sides of the political divide.

On Tuesday (Oct 4), Khairy said that the GEG Bill will be re-tabled in Parliament on Thursday (Oct 6).

However, the Bill did not come up for debate on Thursday (Oct 6) owing time constraints.

Khairy has previously indicated that the Bill may not pass through both Houses of Parliament if it is dissolved.

Dewan Rakyat meeting is scheduled to end on Nov 29 while Dewan Negara will meet between Nov 21 until Dec 7. 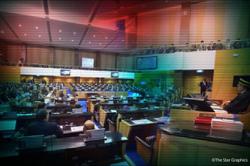