PETALING JAYA: An early dissolution of Parliament – before Budget 2023 is passed or even tabled – is looking to be a possibility now, say political analysts.

With widespread talk that Prime Minister Datuk Seri Ismail Sabri Yaakob will seek the Yang di-Pertuan Agong’s consent to dissolve Parliament today, observers say that it is not impossible that Budget 2023 could be off the table tomorrow.

“I will not be surprised if the Budget is not tabled this Friday.

“If the general election is to be held before the predicted flood season, it must be done before Nov 15.

“I think the government would rather have elections as soon as possible and not be accused of holding it during the monsoon season,” said Dr Sivamurugan Pandian.

“If the Budget is not tabled on Friday, it can be retabled after the new government is formed, like what was done in 1999,” said Universiti Sains Malaysia professor in political sociology.

As it was not passed, it had to be retabled when the new government was sworn in.

Dr Sivamurugan said Barisan Nasional feels it is in a better position to win the elections now compared to next year, with the threat of global recession and inflation issues looming.

Adib Zalkapli, the director of political consultancy firm BowerGroupAsia, feels that Budget 2023 would still be tabled tomorrow, before Parliament is dissolved.

“Technically it makes no difference if Parliament is dissolved this week or next week, the Budget would still have not been passed.

“If elections are held in the next month or so and the Budget is yet to be passed, the new government’s first order of business would be to table the Budget in the new Parliament.”

He also pointed out that the then government tabled a smaller Budget on Dec 20, 1999 for more essential spendings, before a full Budget was tabled later in 2000.

Sociopolitical analyst Prof Dr Awang Azman Awang Pawi said it was likely that Barisan would use Budget 2023 on Friday to showcase an election manifesto.

“I think the dissolution will only happen after Budget is presented,” he said.

“Barisan wants the elections now to take advantage of the momentum, as grassroots support appears to be at a high,” said the Universiti Malaya lecturer.

Meanwhile, Nusantara Academy for Strategic Research senior fellow Dr Azmi Hassan feels that the government might just let Budget 2023 be tabled and brought to a vote.

“If the Government loses the Budget 2023 vote, the Prime Minister can use that as a reason to seek dissolution.

“He could say he needs a fresh mandate as he cannot command the confidence of the Dewan Rakyat, and avoid being blamed for calling an election during the monsoon,” said Azmi. 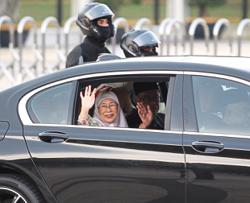