ISKANDAR PUTERI: A task force has been set up by the state government here to oversee flood related issues affecting Johor.

"The task force is looking into solving issues that are causing floods in the state, including those caused by clogged drains and rubbish,” said Mohamad Fazli.

He added that although cleaning work is being conducted, there are still problems with clogged drains as rubbish flows into the drain during heavy rain.

"These are among issues we are tackling and one of the things that we have done was to conduct cleaning work at these drains more regularly," he said, noting that the task force held its first meeting on Sept 26.

He said this in a press conference with Bangunan Dato Abdul Rahman Andak here on Wednesday (Oct 5).

Mohamad Fazli added that 12 flash flood hotspots under supervision of the state Public Works Department (JKR) have been identified in Johor Baru.

"We have made early preparations to ensure that these areas are not flooded during the monsoon season.

"The drains at these areas are being cleaned constantly to ensure that there is no rubbish blocking the flow of water during heavy rain," he said. 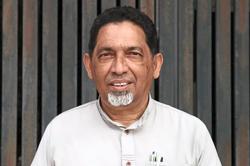