ALOR SETAR: After a video went viral of youths – both male and female – dancing wildly at the Muda Mudi weekend festival in Balai Seni Alor Setar, Kedah has decided to ban all such concerts.

“Yesterday’s incident is a benchmark that any activity that can lead to overstepping local community norms will not be given space to grow,” said Mentri Besar Datuk Seri Muhammad Sanusi Md Nor (pic).

He said concerts that led to unruly behaviour will not be allowed, and the behaviour of youths at the Muda Mudi festival would be the benchmark for the matter.

Instead, he said, the state would “encourage events that are healthy such as fun runs, fun rides, treasure hunts, fishing competitions and other competitions that comply with existing laws and guidelines.”

Muhammad Sanusi told Bernama yesterday all district officers, who chair committees related to entertainment licensing, had been informed about the ban which was effective immediately.

Yesterday, a video of a musical group’s performance on stage went viral.

It showed young people performing various acts, including dancing, at Balai Seni Alor Setar on Sunday. This caused uneasiness as it was held not far from Masjid Zahir.

Kedah Tourism, Arts and Culture Committee chairman Mohd Firdaus Ahmad was quoted in a media report as saying that the state government did not receive detailed information about the festival.

He said he would call the organisers for an explanation. 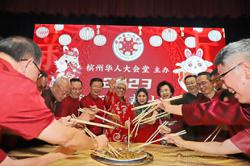 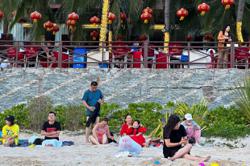 Covid-19 Watch: 211 new infections bring total to 5,037,995
Mechanic finds newborn boy behind kitchen at Kuala T'ganu apartment
Want to take picture perfect shots? The A to Z of photography
Resounding return after the quiet years
Two held for extorting Thaipusam stall trader
Cost of greens up due to rain and reduced supply
Hurl mandarins in search of love
An all-in-one celebration of cultural diversity
Unwell Anwar misses festivities
Fulfilling vows and giving thanks