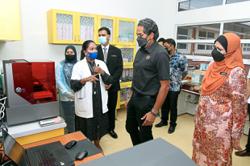 KLANG: The Health Ministry will continue to come down hard on unlicensed dentists, says Khairy Jamaluddin.

The Health Minister urged the public with any information on fake dentists to contact the ministry for further action.

"We will carry on to raid (their premises) when we receive information through investigations to put a stop to their actions.

He added that there have been about 10 raids since the Dental Act 2018 (Act 804) was enforced last year.

"We recently carried out a raid in Setapak. I was made to understand that Setapak is a nest for fake doctors," he said to the media after visiting the Bandar Botanik Dental Clinic and witnessing the pilot project for 3D Dentures.

On Sept 28, acting on The Star’s tip-off, a team of enforcers from the Health Ministry raided a beautician’s hair salon in Setapak and confiscated dental probes, dental fillings and nickel-titanium wire that is commonly used for braces.

The authorities also confiscated a desktop that has records of certificates issued to those who attended the courses.

Health Ministry dental officer Dr Taufik Firdaus – who acted as the lead raiding officer – said a preliminary investigation found that the beautician, who denied having any helper, was not registered with the Malaysian Dental Council.

The Star in July reported about the same premises that were found to have been providing a handful of dental courses before issuing worthless certificates to its “students”.

The short courses, mostly just a few hours long and ranging between RM1,500 and RM3,000, also provided students with a starter kit to help them kickstart their own business including mobile dental services.

The Star’s journalist who attended this beautician’s veneer course was given, among others, a polishing gadget, veneer composite, LED light, bonding agent, etchant gel, mouth retractor and other instruments, some of which are only sanctioned for use by medical practitioners. 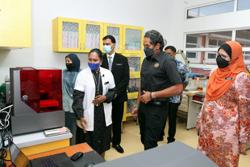