State Tourism, Creative Industry and Performing Arts Minister Datuk Seri Abdul Karim Rahman Hamzah said 50 to 60 beauty queens from around the world would be coming to Sarawak for the pageant.

"Each participant will be an ambassador for us. Wherever they go during their stay here, they will surely take photos and share them with the world.

"We look forward to the pageant and believe it will take the name of Sarawak to greater heights," he said after chairing a coordination meeting for the event on Monday (Oct 3).

Abdul Karim said the participating beauty queens would visit the nearby towns of Lundu and Bau in the run-up to the final.

They are also scheduled to visit the Borneo Cultures Museum, Sarawak Cultural Village and Semenggoh Wildlife Centre, besides going on a city tour and Sarawak River cruise.

In addition, they will participate in a tree-planting event at the Unity Garden at Reservoir Park here and attend a food and fruit fiesta hosted by the Kuching South City Council.

Organising chairman Esther Law said the participants were scheduled to arrive on Nov 11 and 12 for an 18-day programme leading to the final.

"The core purpose of the pageant is to promote tourism, culture, friendship and international exchange," she said. 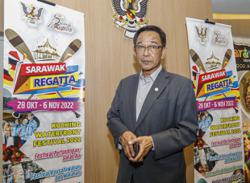