Residents and football supporters gather for a vigil outside the Kanjuruhan Stadium in Malang, East Java on Sunday (Oct 2). At least 127 people died at the football stadium in Indonesia when fans invaded the pitch and police responded with tear gas, triggering a stampede, authorities said. - Photo by Juni Kriswanto / AFP

KUALA LUMPUR: Malaysia is ready to extend any form of assistance if required by the government of the Republic of Indonesia, particularly their Youth and Sports Ministry following the football riot incident on Saturday (Oct 1), says Datuk Seri Ahmad Faizal Azumu.

The Youth and Sports Minister said Indonesia was not just a neighbouring country but both nations were allies that belong to the same kinship and will always be together in times of trouble.

"May this incident serve as a reminder and lesson for all parties. We do not wish to see a repeat of such a tragedy happening in Indonesia, Malaysia or other countries around the world.

"Sports is about fostering the spirit of togetherness and unity not only among athletes but also in all of us. Let us all always have a high spirit of sportsmanship for the common good," he said in a statement here Monday (Oct 3).

A total of 125 people, including two policemen, were reported killed in a riot and stampede after an Indonesian Premier League match between Arema FC and Persebaya Surabaya ended at Kanjuruhan Stadium, Malang.

Ahmad Faizal also conveyed his condolences to family members of the victims who died in the incident and prayed for healing and full recovery of those injured. - Bernama 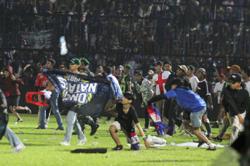