He added that Bersatu will contest another 20 seats with the balance of 19 seats to be discussed with Perikatan allies Gerakan and the PAS Supporters' Congress.

ALSO READ: Muhyiddin and Hadi meet in a show of Perikatan unity

Razman said the 40 seats being contested by PAS and Bersatu were Malay-majority seats with the remaining 19 were mixed constituencies.

"If GE15 is tomorrow, we can move forward," Sinar Harian quoted Razman as saying.

"However, Perak PAS will abide by the central leadership's decision and if it differs, we will follow without question," Razman said at a Perak GE15 dinner and fundraising event in Ipoh on Sunday (Oct 2).

Razman added that Perak PAS had decided to use the Perikatan logo in GE15 and it has informed PAS president Tan Sri Abdul Hadi Awang of this decision, although the final call lies with the central leadership. 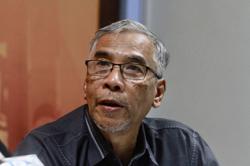