KUALA LUMPUR: Two suspects linked to the abduction of a businessman in Pandan Indah have been arrested, say police.

Ampang Jaya OCPD Asst Comm Mohamad Farouk Eshak, in a statement, said that the arrests were made on Oct 2 within the Jalan Putra Sulaiman area.

"Two men - a factory worker and a vegetable seller - were arrested around 3pm. The suspects, aged 37 and 40, had prior convictions," he said on Monday (Oct 3).

The 37-year-old suspect was found to have a record of eight drug related offences. He also tested positive for drugs.

"Also seized were clothes, handphones and a Toyota Vellfire that was used during the abduction. Both suspects have been remanded until Oct 6," he said.

On Sept 29, a 38-year-old businessman was abducted in front of a restaurant in Pandan Indah by a group of men in a white Toyota Vellfire.

The victim was then released by his captors, with the motive behind his abduction believed to be linked to unpaid debts.

Videos of his abduction were circulated on social media, with several motorcyclists seen chasing after the vehicle. 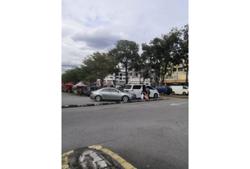