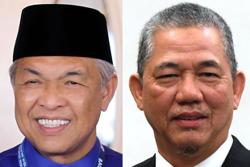 It was the seat which he first won in 2013 when he made his parliamentary debut.

The former Pandan MP said he had made it clear to the party leadership which is in the midst of finalising the list of candidates for the election.

"I have made it clear that I want to defend Pandan, pending the party's decision.

"I would be able to campaign more effectively at the national level for PKR candidates if I stand in Pandan where we are established with good support," he told reporters in Penang on Sunday (Oct 2).