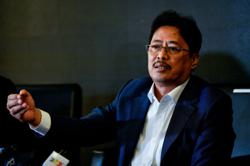 A total of 81 people were conferred the Panglima Gemilang Darjah Kinabalu (PGDK), which carries the title “Datuk”.

Recognition: (From left) Azam, Gunsalam and Kadzim are among the recipients of the Seri Panglima Darjah Kinabalu award.

Earlier in the morning, Juhar attended a special event in conjunction with his birthday at Padang Merdeka where various departments marched in his honour.

In his speech, Hajiji said efforts to intensify development and improve the people’s quality of life would be carried out by the Sabah government.

“More needs to be done, but as a responsible state government, it must continue to look after the people’s welfare by developing all sectors in the state.

“The government will focus on developing infrastructure and utilities in the rural areas; upgrading communication networks; (improving the) quality of education, health, human capital; providing affordable housing and poverty eradication,” he said in his speech at the investiture ceremony.

Hajiji said creating more job opportunities, improving security and reviving the economy affected by the Covid-19 pandemic would also be carried out.

He added that Sabah had spent more than RM2.39bil on development projects under the Second Rolling Plan of the 12th Malaysia Plan (12MP) as of Sept 4 this year.

This constitutes some 45% of the more than RM5.23bil allocated under the 12MP for a total of 1,118 approved development projects.