The party’s state chairman said Anwar had hinted he will contest a seat held by one of the “traitors” to Pakatan Harapan.

“We have one in Tambun as well, and thus we welcome Anwar to contest in Perak,” he said in his speech at the state DAP convention held at a hotel here on Sunday (Oct 2).

He had been declared a "traitor" by Pakatan Harapan for his role in the collapse of the previous state government in 2020 by switching sides to Perikatan Nasional shortly after the Sheraton Move.

On Sept 28, Anwar said he had to pick areas held by traitors as a message that treachery in politics is not acceptable.

Nga added that Anwar contesting in Perak will be a final push for Pakatan to win big in the state.

“In Perak it is always 50-50, where the difference of seats won is always very slim,” he said.

Nga also said Pakatan’s prime minister candidate Anwar would be the best choice to lead the country which was in chaos at the moment both economically and politically. 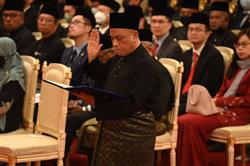