KOTA KINABALU: A proposal to nominate Sabah Huguan Siou or paramount leader for the Kadazandusun Murut communities Tan Sri Joseph Pairin Kitingan as the next head of state should be supported, says Sabah DAP.

Its chief Datuk Frankie Poon said he personally does not see anything wrong in the proposal to nominate Kitingan as the next Yang di-Pertua Negeri (TYT) Sabah, as the latter was a known figure in politics.

“In fact, when I spoke to our Sabah DAP members, none expressed their objection to this proposal,” he said when contacted on Saturday (Oct 1).

He said Kitingan was a renowned leader who has contributed a lot to the state when he was still active in politics, a former chief minister who held various other ministerial positions and was more than capable of holding the TYT post.

Poon said this proposal should be supported by the people and the state government.

He said that Kitingan could be just the right representation of what Sabah truly is made of and portrays the rich and diverse ethnic groups in the state.

He said that there was no mention of race or religion in the state constitution when a person is to be considered for the TYT’s post.

“Of course, the only thing is that the nominated person must not be a naturalised citizen,” Poon said.

He hopes this proposal would turn into a proper and official nomination.

“We hope the state government will accept the proposal and bring the nomination further for consideration,” he said.

Last week, the Kadazandusun Cultural Association (KDCA) made this proposal out of respect for the Huguan Siou, seeing that the current TYT, Tun Juhar Mahiruddin’s term as the head of state will be up soon.

Several other leaders from parties including Upko have voiced their support for this suggestion. 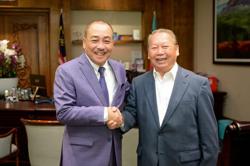