Steep exchange: A money changer gesturing that one has to fork out RM450 for US$100 based on the exchange rate for the currencies at his shop in Jalan Masjid Kapitan Keling, Penang. —CHAN BOON KAI/The Star

GEORGE TOWN: After persevering for two years against the pandemic, Malaysia’s economy looks to be making progress, especially the tourism and export sectors that could capitalise on the weakening ringgit to bounce back.

“Compared to about three months ago when the ringgit was RM4.39 to US$1, export-oriented manufacturers, especially those with low import content, have gained about 5%, given the exchange rate of RM4.50 to US$1 today.

“Earnings in US currency helped offset the higher cost of imported raw materials and logistics,” he said.

Importers, however, would lose out, as their earnings in ringgit would not offset the higher logistic charges for air and sea freight and importation costs, Lee said.

“The higher interest rates worsen the situation. Currently, the bank interest rate is about 4.5% compared to 3% a year ago. They are, therefore, hurt by a weaker ringgit and high interest rates,” he added.

Malaysian Institute of Economic Research head of research Shankaran Nambiar said that while a weaker ringgit made Malaysian exports attractive and benefited exporters, it was also equally valid that countries whose currency had depreciated against the US currency would eventually import less.

ALSO READ :A timely investment opportunity for some with growth of US dollar

“The Japanese and Chinese currencies have depreciated recently, affecting their purchasing power in buying from Malaysia, a situation that wouldn’t spare local exporters, as Japan and China are Malaysia’s key trading partners,” he said.

Small and Medium Enterprises of Malaysia (Samenta) honorary secretary SH Yeoh said the downside of a weaker ringgit was, of course, the price of imported raw materials shooting up.

“Margins for those selling only to the domestic market will be squeezed. The higher import cost will have to be passed on to consumers, affecting demand eventually,” he said.

Yeoh added that a weaker ringgit also meant that overseas holidays would be expensive.

On the brighter side, a weakening ringgit would attract more tourists to the country.

“Since the opening up of the country’s borders, leisure and medical tourists have been coming in.

“There’s no doubt that a weaker ringgit played a pivotal role in enhancing Malaysia’s competitive edge as an attractive leisure and medical tourist destination.”

Samenta has some 3,000 members nationwide.

ALSO READ : Strong greenback a welcome sign for some Malaysians

Industries Unite MCO 2.0 coordinator Datuk Irwin Cheong said with the stronger US dollar, businesses had to pay higher fees for their advertisements on social media.

“Most of us get our items from China and other countries.

“However, for advertisements on social media, we still have to pay in US dollars,” he said.

Industries Unite is a coalition of 120 trade associations and chambers of commerce, as well as associations from the retail and hospitality sectors.

In PETALING JAYA, trade associations also warned that while the stronger US dollar might make Malaysian exports competitive, the weaker ringgit might lead to higher production costs and would not bode well for importers.

Malaysian International Chamber of Commerce and Industry president Christina Tee said importers, especially those in the consumer and food sectors who sell in ringgit and buy in US currency, would be heavily affected.

“They will probably pass on the higher import costs to the public, which would result in inflation – and we have (already) seen this,” she said.

Tee added that the weaker ringgit would only add more cost pressure to businesses that were already reeling from the effects of policies such as the new minimum wage and flexible work arrangements, among others.

“We hope that the government will assist us in stabilising the currency fluctuations,” she said.

The ringgit closed at 4.6475 against the greenback yesterday. In the year to date, the ringgit has declined by 9.7% against the US dollar.

A timely investment opportunity for some with growth of US dollar 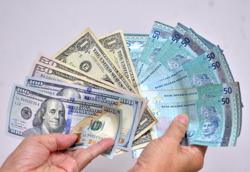