SUBANG JAYA: A 13-year-old boy drowned after he fell into the river at Kampung Bukit Lanchong, here.

The victim Wan Mohamad Hafiq Wan Ismai was trying to retrieve a ball when he fell into the river at 4.56pm on Thursday (Sept 29).

"Search and rescue operation was launched when rescuers arrived at the area at 5.29pm.

"It began at the location where he was believed to have fallen into the river," he said when contacted on Friday (Sept 30).

The victim's body was discovered at 8.21am on Friday some 2km from where he fell, Norazam said. 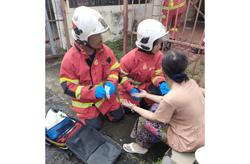