SHAH ALAM: Universiti Teknologi MARA (UiTM) has terminated the service of a lecturer who was accused of sexually harassing a former student, effective immediately.

In a statement on Thursday (Sept 29), UiTM said it took seriously the allegations of sexual harassment against the lecturer and had conducted an investigation following the guidelines and legal process contained in the Statutory Bodies (Discipline and Surcharge) Act 2000 [Act 605].

It said under the act, disciplinary action can be taken against staff members who violate rules, codes of conduct and prohibitions contained in Act 605 and UiTM regulations.

Additionally, it also said that the UiTM Integrity Unit had conducted a thorough investigation starting last year based on all the evidence that had been collected, it added.

"After the interrogation and internal investigation procedures were completed and discussed by the Disciplinary Committee, UiTM has taken action to immediately terminate the service of the lecturer who was accused of sexually harassing the former student," read the statement.

"If anyone disobeys an order or behaves in any way that can reasonably be interpreted as disobeying an order, the university will not compromise and will take stern action against them," she added. - Bernama 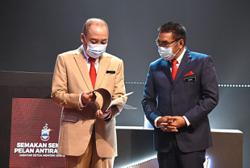